Socialism is about people and their access to the profits from resources. Not Gunnar Gunnarsson’s. Here are some pictures of his world…

Water for the Taking

There are so many waterfalls in in Iceland that these beautiful falls aren’t even on the Icelandic Waterfalls tours.

Land for a Home

When it was inhabited in Gunnar’s day, this farmstead would have been made out of stone and sod. No need for socialization of those resources, either.

No need for socialization of art. Heck, no need for art. The earth makes it a-plenty.

Yes, these are images of poverty. Gunnar had no problem with poverty. In his eyes, it was wealth, because it had access to a greater communal wealth. 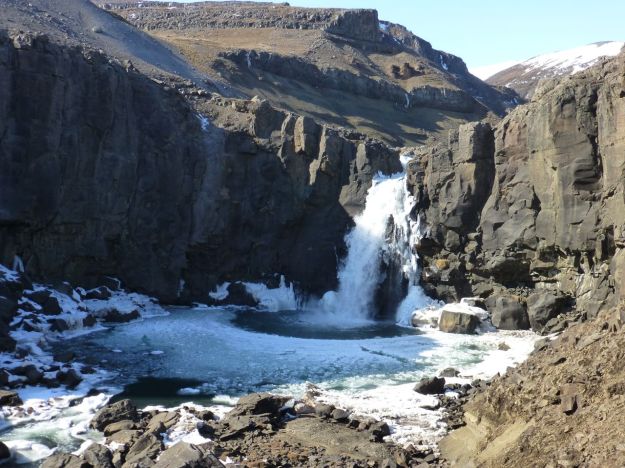 Water Source for that Farmstead Above

It’s a 60 minute climb from here to the first falls I showed you, if you dawdle and try to take pictures of falcons (?) with a camera viewfinder you could never see a moving falcon (?) in. Or even the ravens that laugh at you as they go by.

No doubt, the farmer in the homestead worked for the larger farms in the valley. Gunnar wanted to found the largest farm of all. That’s where socialism could, in his world, be some use: providing an interface between land and the outside world, so that the people could remain the land — not ‘on the land’, but ‘the land itself.’ His role as a landowner was to be a cultural broker, to ensure that the people stayed within the wealth of the land. That was his responsibility. Out of a community to which this was home …

… society, too, was built out of the earth … 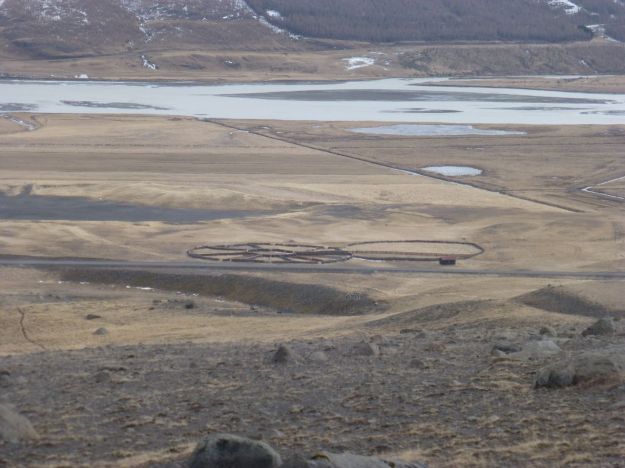 The local communal sheepfold, for separating out the region’s sheep in the fall. Everyone helped, together. One didn’t need fences. One just needed a little bit of cooperative organization. The land provided for the rest. This is the image of Gunnar’s socialism.

Hitler had National Socialism. Gunnar had Land Socialism, extended from an older aristocratic land-management model. And to think, he went to Denmark for an education and found modernity instead of support for his ideas for an indigenous Enlightenment as a man of the land …

Denmark’s Avante Garde Emulating the French of Twenty Years Before

Tom Kristensen brought English avante garde poetics to Denmark, and with them French ones. That looks like his wife Ruth to the left. 4 years later, Tom will be a hopeless alcoholic and will divorce her. Shortly thereafter she will bear Gunnar’s third son. That’s Gunnar standing, by the looks of it, holding forth. He was so misunderstood that he has vanished from Danish literary consciousness. One Danish Encyclopedia comes right out and says contemporary readers don’t like his poetic style or his sermons. Tom is still widely read and studied. His books are as lyrical as Gunnar’s, but in a more fractured, alienated style, without narrative.

No wonder Gunnar went home. It’s amazing it took him so long.