The puffins of Rauðarnes are a fun bunch. The walk is stupendous. It’s 7 km, return, but you could easily spend days sauntering along.

You can brave the rough, steep road to Borgisfjörður Eystr and see the puffins up close and personal, and they are really, really great, but this is better, because they aren’t so crowded, which gives a different dynamic, and more goofiness. These are, like, country puffins. 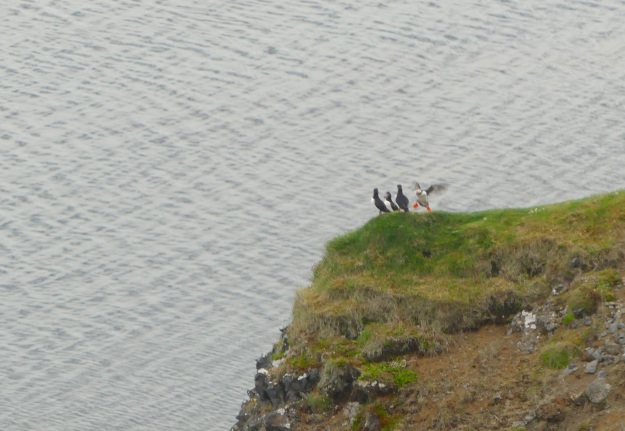 Plus, the gulls are sneaky. See her below?

And unlike the puffins in Borgisfjörður Eystril, they aren’t controlled by hidden netting to preserve their habitat and green it, so these are puffins in the raw, so to speak, which means erosion, yes, but also (see below) a penthouse!

Turn off the road to Vellir Farm just north of Svalbard, just north of Þorshöfn. You will soon be there, puffing on your 3.5 km walk to the puffins, delighted by the sculpted sea stacks and caves on the way. Get there soon, though. The puffins have an ocean to get back to. Oh, by the way, if you’re lucky, you can get pretty close. How about 3 metres?