You don’t have to be creative here. You just have to get up in the morning. The story will find you.

And his backup band!

You can see the sheet music in front of them, right?

Every Day is a Fairytale in Kopasker!

In contemporary culture, creativity (a rather new term) is a word used to describe a vast array of impulses. The New World Encyclopedia sums it up like this:

Creativity is a process involving the generation of new ideas or concepts, or new associations between existing ideas or concepts, and their substantiation into a product that has novelty and originality. From a scientific point of view, the products of creative thought (sometimes referred to as divergent thought) are usually considered to have both “originality” and “appropriateness.”  Source.

Well, shall we apply that, then? And where better than Kopasker in North Iceland!

The farming industry has modernized. The fishing industry is bust. An earthquake split the town in two. But they have a nice new lamb-processing plant. What on earth is a town to do? Why, welcome guests by standing in the fields waving, that’s what!

It is most charming and folksy and as non-Reykjavik Icelandic as it gets, but is it creative? Is it, gasp, the product of …

Well, yes, if we maintain a human bias on the situation. No other conclusion could be drawn — if, that is, the definition is correct. Let’s look again. Are these really original figures? Or are they copies? Are they mirrors of human form, seen elsewhere? Are they projections of the human subconscious?

I think so. I think humans are acting as lenses or catalysts for energy. I also think that seeing the issue in this fashion breaks the idea of creativity in just the way the earthquake broke Kopasker apart. That was a lousy thing for Kopasker (it is a very small place and, really, has no infrastructure for dealing with a body blow like that), but maybe it’s good for humans to get knocked off their pedestal a bit. And then there’s this ..

By golly, the woman is made out of discarded fishing floats and what is that, an early IKEA sheet set and Grandma Karin Thorsdottir’s blouse? Oh, shucks, not to worry, it’s not just her who’s doing the disused-fishing equipment thing but Thor himself! Whew!

Here’s a suggestion: what humans have made here, most charming that it is, is not creative. Creative lies in the energy held within the used articles. Humans mine them by recombining it in age-old forms, such as Thor and Grandma Kirstin. The design and effort and patina of use that adheres to and is present in articles is used over and over in Iceland. Maybe that’s common human experience everywhere. That seems likely. Here’s a humanized view of a disused gas station in Iceland’s far north. This is like Gas Station Version 1.0. 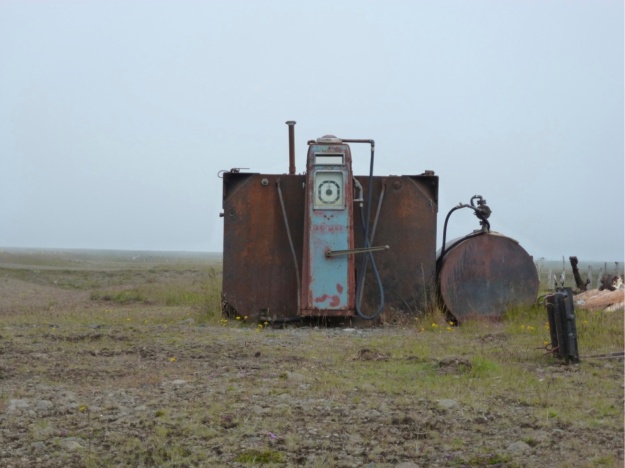 It looks like a human form, too! Well, at least in the way I’ve framed it. Maybe that’s what the human eye does all the time: finds the human body out there and maps the world according to the physical shapes and processes it knows well. That this, and all art works, is a map of the human mind, and what isn’t a human artwork? Well, what about this, then?

The invention of the colour blue! I swear, it didn’t exist before I walked up the valley and through the snow drifts and over the hill to find it here, glowing like a blue sun.

Is that creativity? Since contemporary culture has given the study of natural phenomena to scientists, because they took it, mostly, is it like they say? Is it this:

From a scientific point of view, the products of creative thought (sometimes referred to as divergent thought) are usually considered to have both “originality” and “appropriateness.”

Well, no. It’s not the product of creative thought. It’s a waterfall. Ah, but is it? Is it not an image of a waterfall? But, leaving that aside, might it be that it is full of energy, just as the fishing floats are? And that this energy can be mined, just as the energy of the fishing floats can be mined, instead of them being capitalized, as is the dominant economic model today? Why, perhaps, yes. Take a look at Reykjavik and see what the city has been fiddling around in while the Kopaskers have been gluing their town back together with plumber’s cement and fishing floats and good humour.

It catches the light, concentrates it, and projects it, just like Strutfoss does.

The apparent difference is that it is human aesthetic and social light that it gathers into itself and projects, as  this is the main display space for most of Icelandic “creative” culture, while Strutfoss projects elemental energy, but I dunno. They look much the same to me, once this pesky ‘creativity’ word is divested of its human bias and given to the world. Or to a horse. 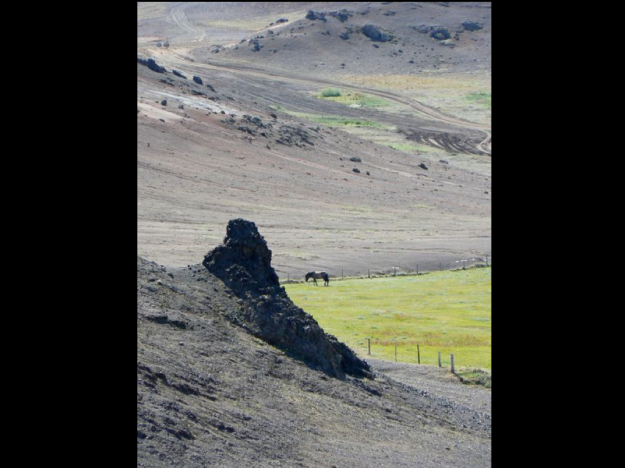 Horse in a Field Created Just for Him and Him Alone, Myvatn, Iceland

Giving energy away, in other words passing it on rather than keeping it, now, that might be creative, but only in the sense that we are defining creativity as just that: passing energy on. The forms aren’t new. They are just recombinations of past energy use and the relationships inherent in it and its products. The energy, though, and the life it can create, in all senses that there are life, that is creative. Humans don’t create life, but, like the Harpa, they can create the conditions for it, and then they can stand back and marvel.

Great Blue Heron Hunting for Mice in a Hayfield