And it is this world.

That’s the part that makes the hair stand up on the back of my neck.

This makes Icelanders people of another world. Or at least of two worlds at once. There is also the world of darkness.

If smoke is the outpouring of a geothermal plant, such as that here below in Reykholt …

Everyone’s an artist in Iceland. It’s a thing.

Settlement is the foundational theology of Iceland. In countries such as mine, Canada, or that of my ancestors, Germany, foundational theologies tend to be about colonization, either of the land and bodies of other people or of the self. Not in Iceland. 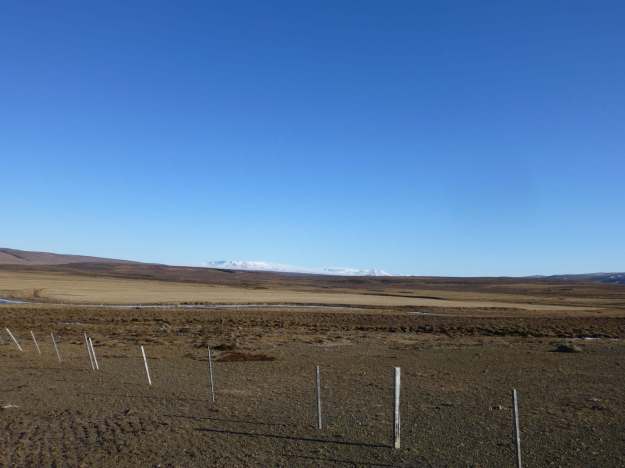 In Reykholt, Snorri Sturluson wrote the texts that define Norse theology. If you visit Reykholt, you will soon see that these books represent the landscape around Reykholt more than any historical theology.

In short, they are more a way of settling the land the of claiming it. 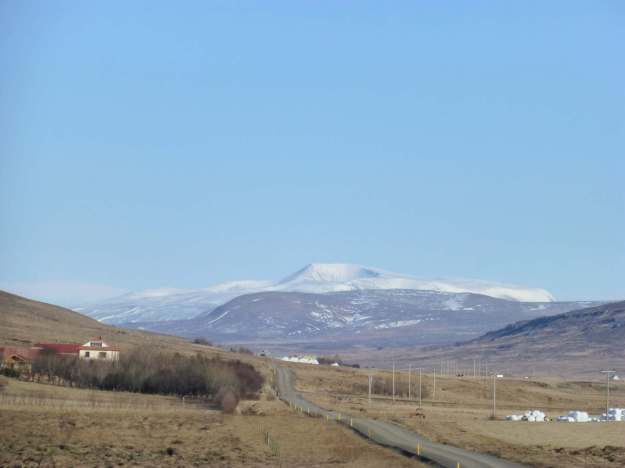 Witness the chosen motif for the altar of the old church in Reykholt. The White Christ rises as the sun…

… much like the mountain up the valley, capped with its glacier from before human time.

It is a world in which ancient binary forces, ice and fire, create a human habitat, the world, which is a kind of whirlpool in the sea of the universe, which is, really, the sea.

Human activity has eroded the primal world, but that pre-human time still delivers water and the power that defines humans.

The church itself, exists within an ancient, pagan forest, blessed as the source of nationalism. It is an accurate depiction of Icelandic culture. Sure, it’s planted, but that’s part of the point of living within a settlement. 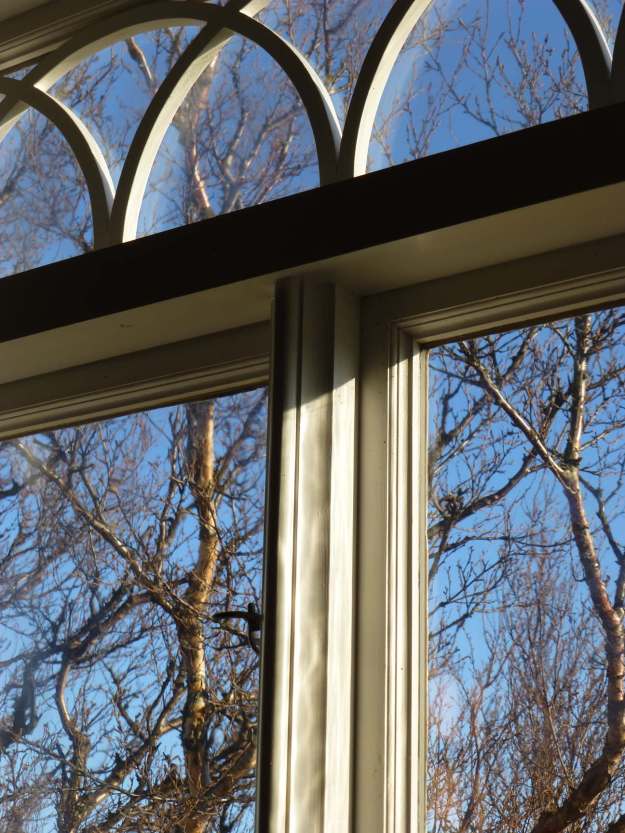 When summer comes, Icelanders don’t take to the sea, they take to the forests. They already live in the sea. It is settlement they celebrate, and that includes placing them within the forest like the old church at Reykholt. Tourists drive through the birch forests below, take a few pictures, and drive back and away to claim that they were there, but Icelanders turn off into them and settle for the summer. 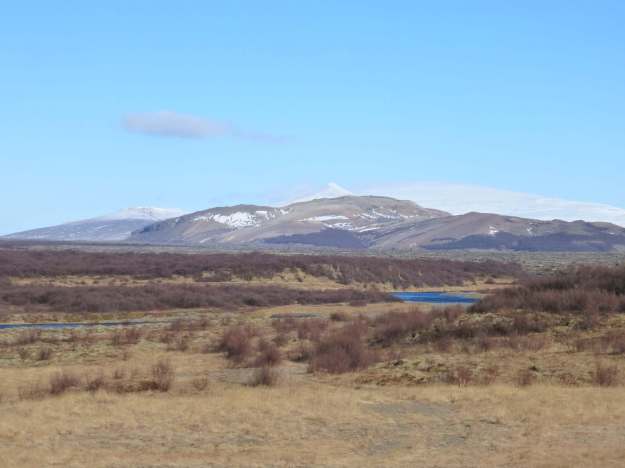 Just to the north, at Bifröst, they do it right at the bridge between worlds, and that’s the key to Iceland: this settlement right at the point at which power erupts from the land. It’s stubborn.

Perhaps, travellers to Iceland see a forest in the image below (taken at Geysir to the south east). 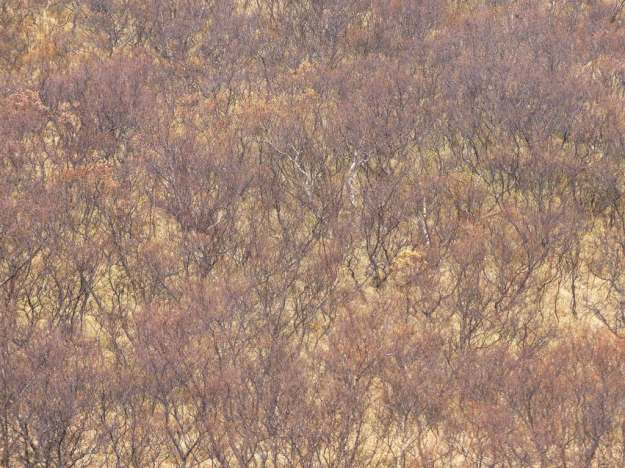 Perhaps they will call the old pre-human world nature …

… perhaps they will even realize, in a breathless moment, that this nature is not the Garden of Eden… 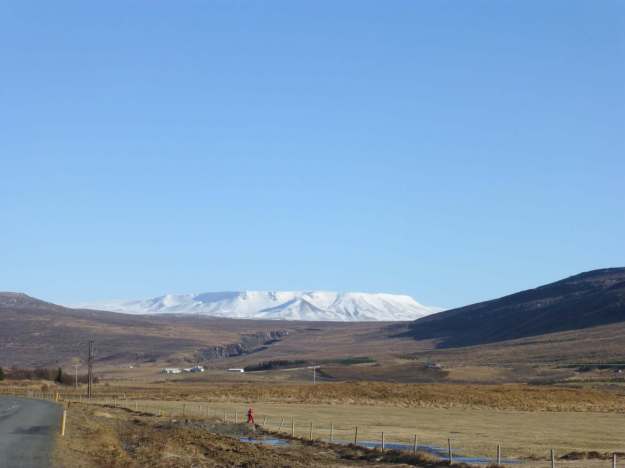 …and realize that you need tools to settle your panic in the face of such power, such as the fire hydrant in downtown (!!) Reykholt above, one of Iceland’s major urban centres, or in the pre-Christian tools facing the altar from the door to the world of the Reykholt Church below.

I mean, for those of you who can’t just drive on, because when you are at the intersection of all power in the world, either here at Bifröst … 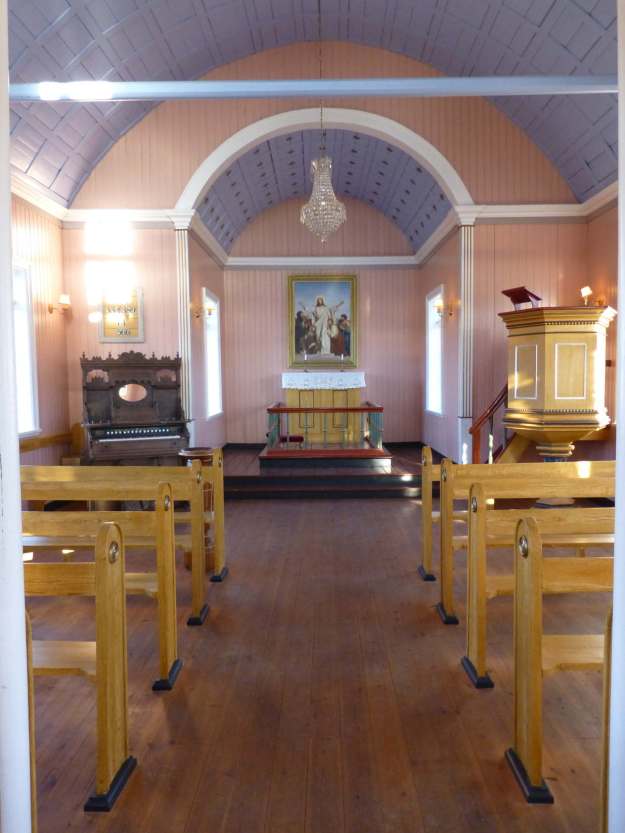 … or here in Reykjavik… 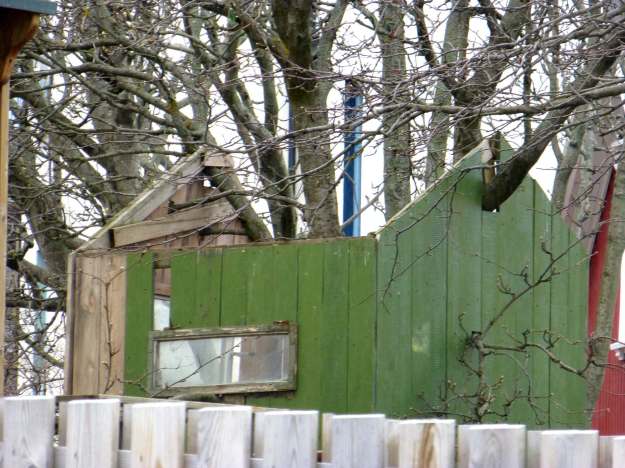 … but immediate and present power without symbols at all.

It’ll change you.  Do you dare settle, within, in a point of balance? 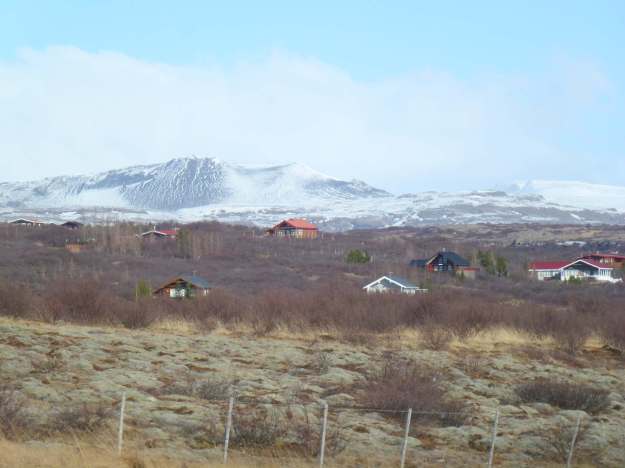 Or will you make a claim, to display your presence, such as these (illegal) tourists cairns below, above an Icelandic summer village at þingvellavatn? 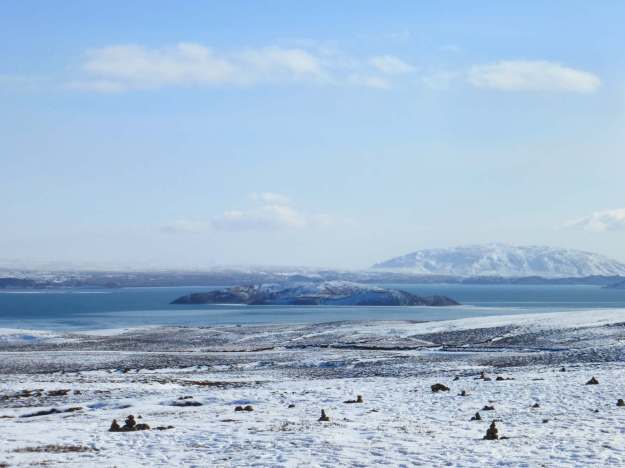 Or will you turn the ancient forest into the outflow for a hydroelectric dam? 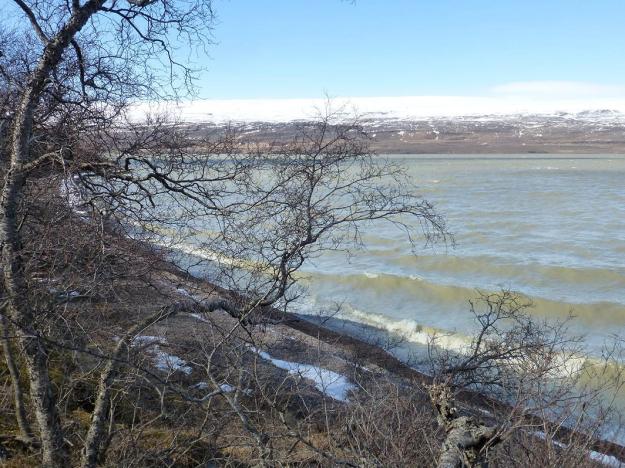 Don’t expect the Icelanders to tell you. They don’t have to decide these things. They already live here. 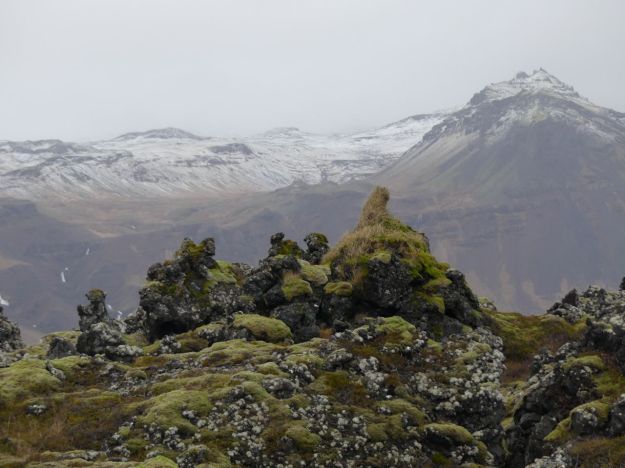 The Icelandic artist Páll Guðmundsson of Húsafell does a lot of work with rock. Sometimes he makes faces on boulders and scatters them in streams, where they look a lot like the boulders with natural faces that are already scattered there. It is like adding extra cards to a deck, and makes life a worthwhile adventure. On December 1st, 2008, however, the Church of Reykholt, Iceland, put on a display of prints of St. Cecilia, which Páll created by painting ice with images with pigments made of ground local stone, then allowing the ice to print them onto paper as it melted. They are inscribed with poems by Thor Vilhjálmsson. Here is one…

What an inspiring transformation of the art of lithography! Páll is not the only artist in Iceland playing around with the interface between faith, ice and stone. Here’s a spontaneous piece of folk art I found at the sheep fold on the cinder cone, Grabrok … 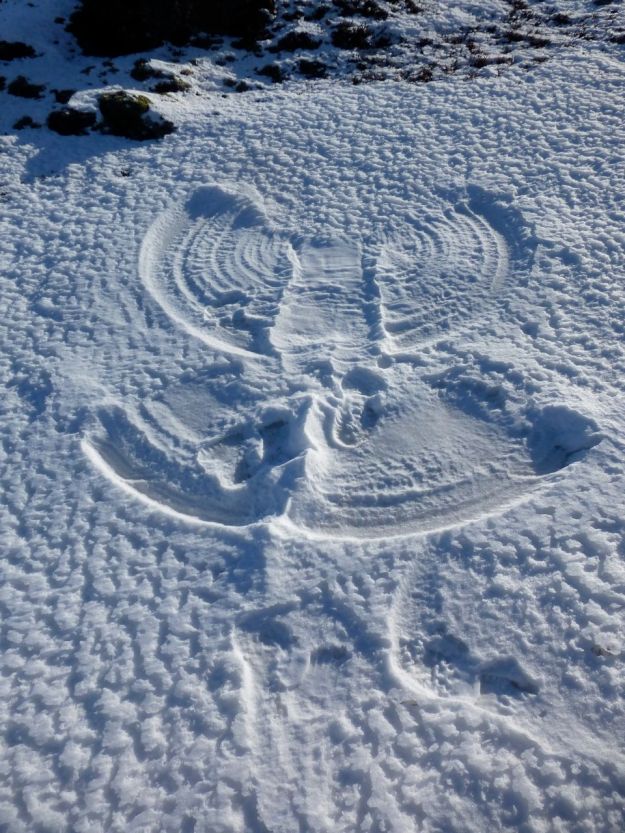 The angels are among us. Good to know.

Next: snow meets the sea at Sauðarkrokur. 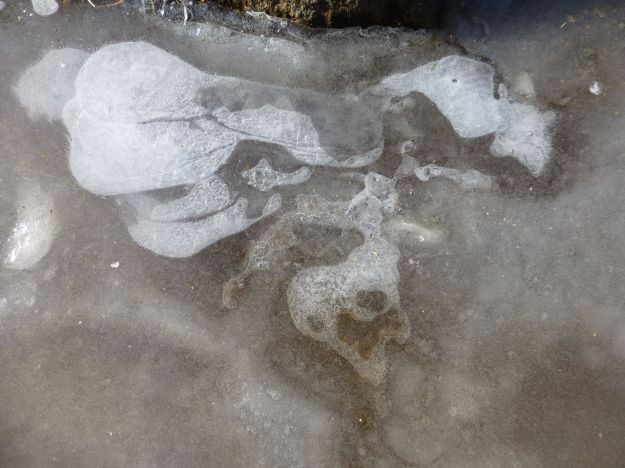 What’s a ghost? Why, something that’s neither dead nor alive and which brings a message from deep within your story.

As for people, they’re writing something else. Here’s what visitors to Iceland write upon the body of the land when they visit: 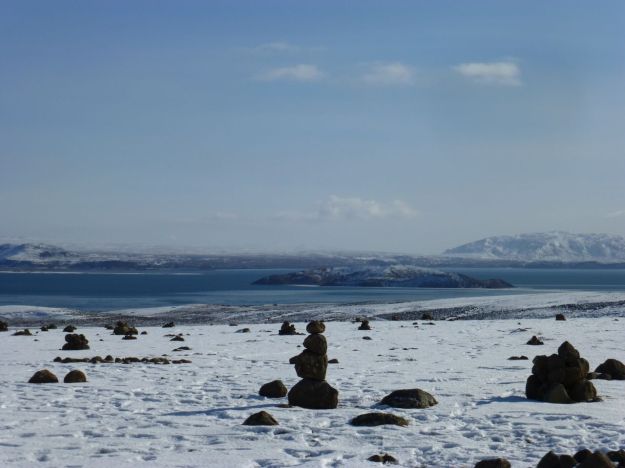 They just have to leave a record of themselves, it seems, using whatever is at hand.

For people who live within a landscape, language comes from the land, the water, the light and the air. Here’s a piece of just such a language from Iceland: 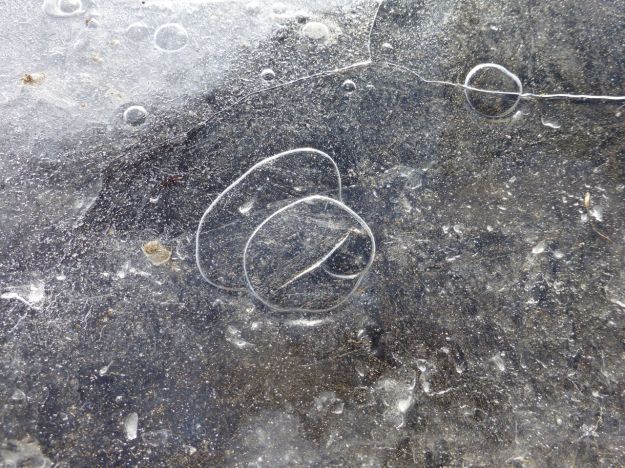 Forget about cuneiform and Linear B and language starting with bird tracks in sand. There is another way. Forget about writing for purely human audience and deferring the environmental costs of turning from the earth until the future. That future is now. 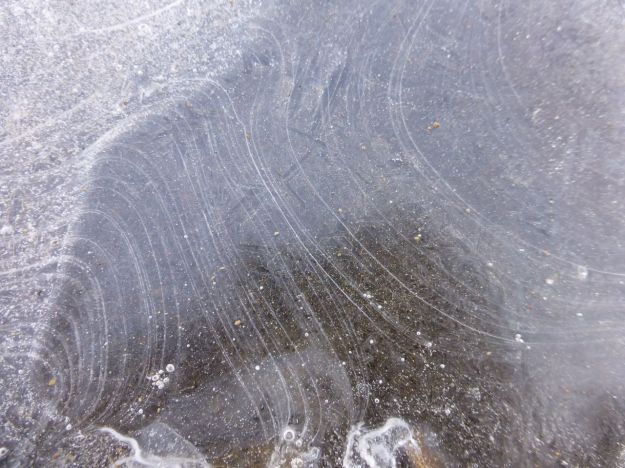 Compare that to the lines in this stained glass window from the church in Reykholt, West Iceland: 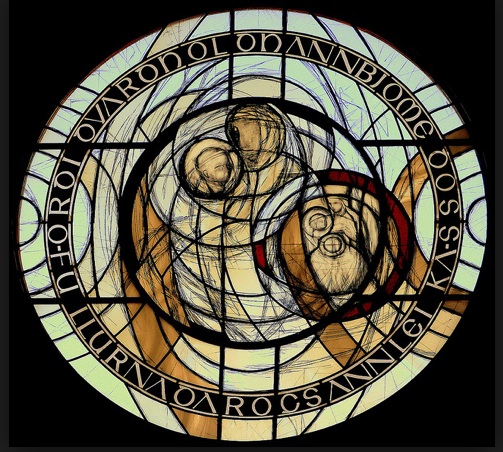 Iceland is a country in which Christianity is uniquely bound to the soil. Unsurprisingly, Gunnar’s ghosts are a surprisingly devout bunch, called forth in a moment of nationalist zeal. This is one lesson I’m going to happily take home to Canada in 6 weeks. Sometimes the hidden people of a country can be the people themselves.

Next: I will explore these ideas further by discussing an Icelandic artist who paints with ice.

Every Western church has a window much like this …

This is a window painted with the art of the mind. Reykholt Church Altar, Iceland

Not many churches, though, have this for a view while you’re sitting in a pew …

Imagine if a people had cut down all their trees to stay warm in the cold, until the poets came along and started planting trees again, until memory was a live and growing year by year, and you could walk through it. Imagine a people who found their liberty in this way, rather than by war or revolution: by planting trees. Well, it’s the kind of country that might build a road like this…

Putting towns at the ends of roads is so expensive. There are other places people need to go. Even Gunnar Gunnarsson found his way home.