Here’s a beach warning sign I found at Dritvik on June 21. 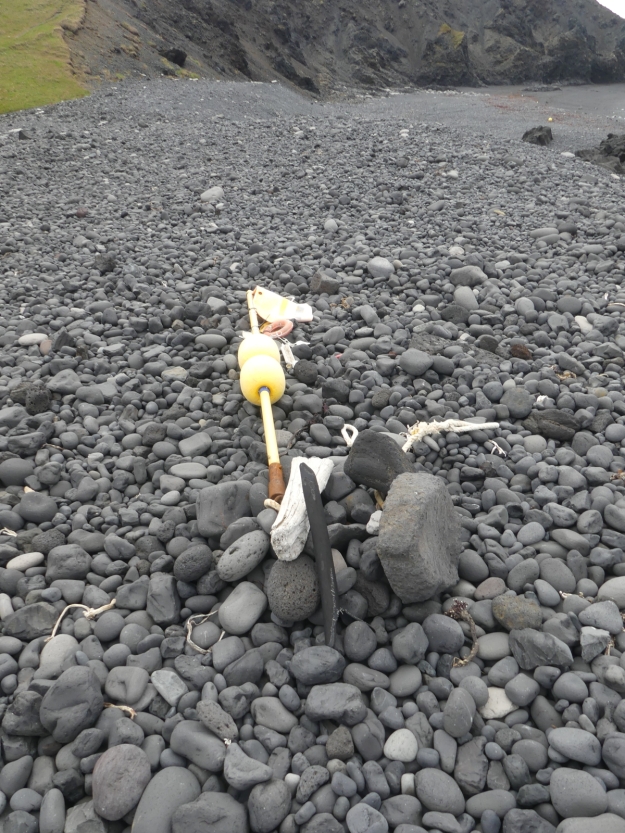 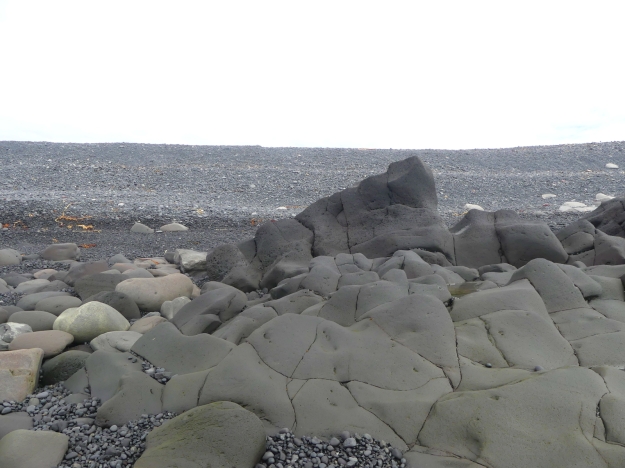 A tough choice, I know. Just a few kilometres apart, way out there on Snæfellsnes (so likely of the same species) there are the Ogres of Djúpalónsandur …

…wading together out into the storm…

…and just a few kilometres west, out at Dritvik… splashing in the waves …

…the Ogres of Dritvik, the now-abandoned Second City of Iceland, staring out into the open Atlantic.

But, hey, no problem. It’s always a good day to sit back and enjoy the sights.

We are not kidding about the magic. Or the storm. 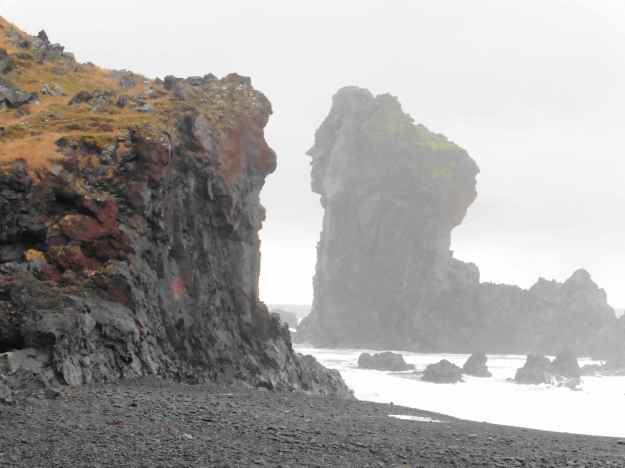 Watch out for the surf! It’ll catch you if you come too close. Sneaky, dangerous surf. Good for ogres, though.

In 1955, the Icelandic writer Halldór Laxness, Genius of Wordsmithing, Bane of Gunnar Gunnarsson the Scold, won the Nobel Prize, which Gunnar, who had friends in high Scandinavian places like Copenhagen and Oslo, thought would be his. Here’s Halldór, looking like the 1920s in 1984.

Halldór is rightfully famous for a number of books, but perhaps most importantly for Independent People, his masterpiece of Icelandic stubbornness, lack of planning and general nrrrghhhhh! 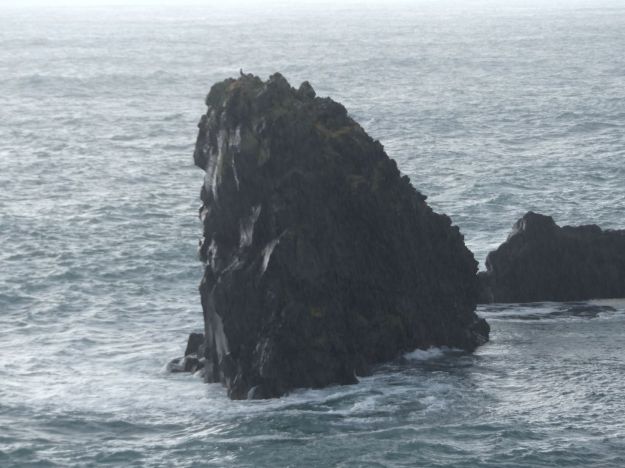 Right, here is the ogre in book form:

In translation, it loses a little something:

And that’s the irony, eh. Gunnar and Halldór thought they were competing for a literary prize, but, really, it was a political one. In 1955, NATO needed Iceland as a military base blocking Soviet access out of the Arctic, which means it needed it to be independent, and with Icelandic leanings towards communism, who better than a reformed communist like either Gunnar or Halldór? Perfect. Even better, Halldór wrote like an American, while Gunnar wrote like a German, all tangled up with prayers and poetry and other bits and pieces of Icelandic Nrrrghhhhh!. Here, let his neighbour today show you: 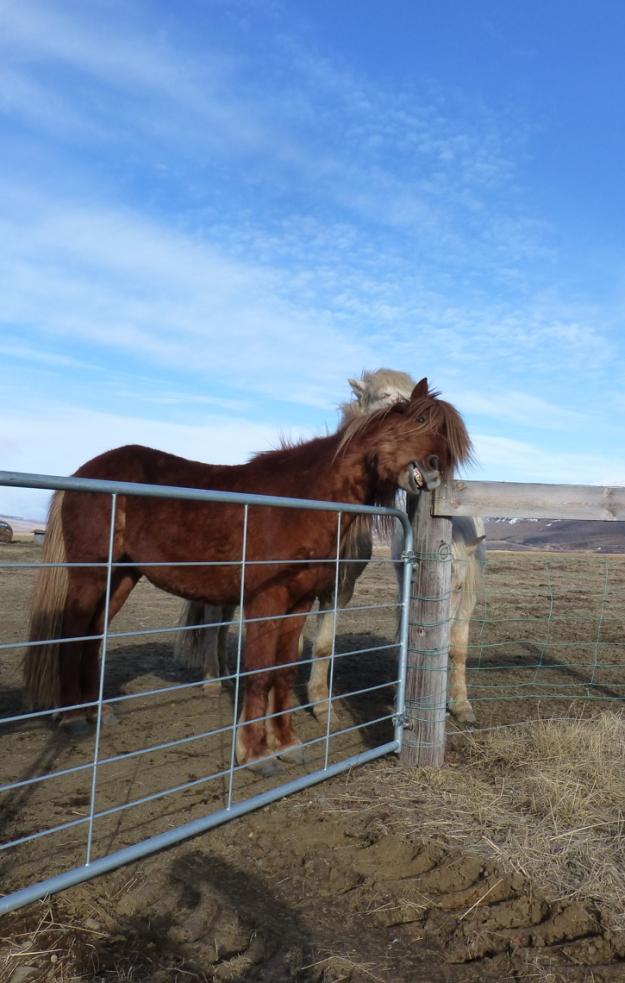 Gunnar translated this neighbourly chat into his book Advent, which the Americans translated, complete with skis like a bazooka and a fur hat like a military helmet, to secure their WWII military base on Iceland: 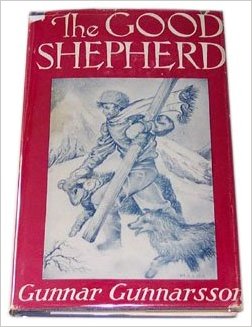 Neither of them in their little wrestling match quite understood that right. Halldór’s Nobel prize speech is an example:

But if an Icelandic poet should forget his origin as a man of the people, if he should ever lose his sense of belonging with the humble of the earth, whom my old grandmother taught me to revere, and his duty toward them, then what is the good of fame and prosperity to him?

A dig at Gunnar, I’d say, who wangled his writing into fame on the European continent, especially with his friends in the German Propaganda Ministry, for whom he, nonetheless, wrote books about Icelandic peasants who would have been right at home in Halldór’s Independent People, although, ahem, Halldór also left Iceland when he was 17, and lived for decades abroad, mostly on the European continent, and it’s all so sad now, that old politics, because somewhere in their time, someone broke a shovel handle at Kirkujubær and just left it there in a spate of “Nrrrghhhhh!” (you can find it still, today at the sheepfold, one of Gunnar’s favourite spaces)… 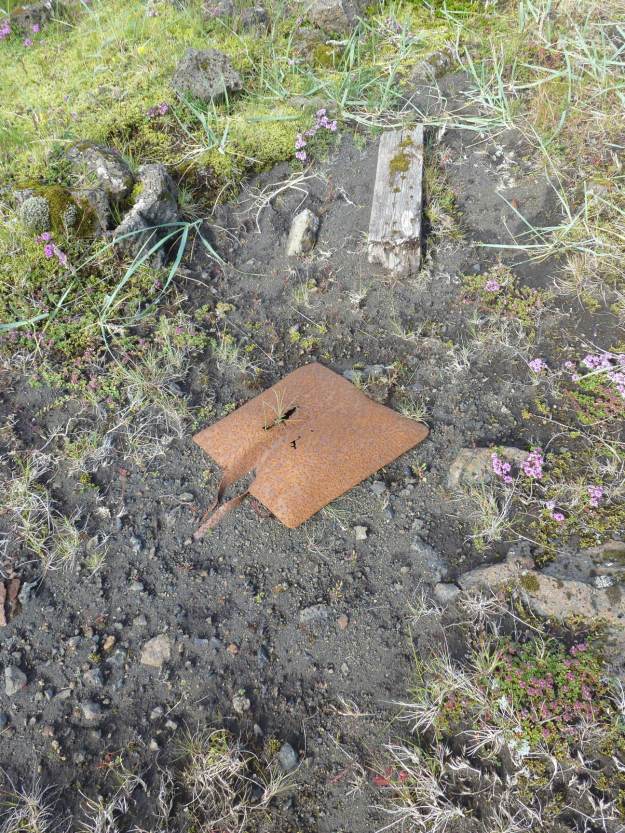 In Gunnar’s Iceland, both wood and shovel would have been untold wealth.

… while the modern world that replaced that fierce stubbornness has also gone to ruin now for the same reasons:

Ah, perhaps, we might give Halldór the last word:

It is not so strange perhaps that my thoughts turned then – as they still do, not least at this solemn moment – to all my friends and relations, to those who had been the companions of my youth and are dead now and buried in oblivion. Even in their lifetime, they were known to few, and today they are remembered by fewer still. All the same they have formed and influenced me and, to this day, their effect on me is greater than that of any of the world’s great masters or pioneers could possibly have been.

After all, not just the Nrrghhhhh but also the wealth remains:

Now that the West needs Iceland as a military base once more, I think we can expect the Nobel Committee to turn its eyes to Iceland once again, and writers being writers, I think we can be pretty sure that they will talk about words. Meanwhile…

Here is a social space in Reykjavik that’s not a park, a street, a building or a yard full of old rowan trees and mystery. It’s more mysterious yet. This is what the people of the north of the world call The Sea Room.

And on Snaefellsnes? Yes, there’s one there, too.

And in the far north, too.

Note that the Sea Room has few boundaries. It has a sense of being open, with a free flow out to the open ocean, which it is nonetheless separated from by a sense of space. Compare that to a lagoon in the East. 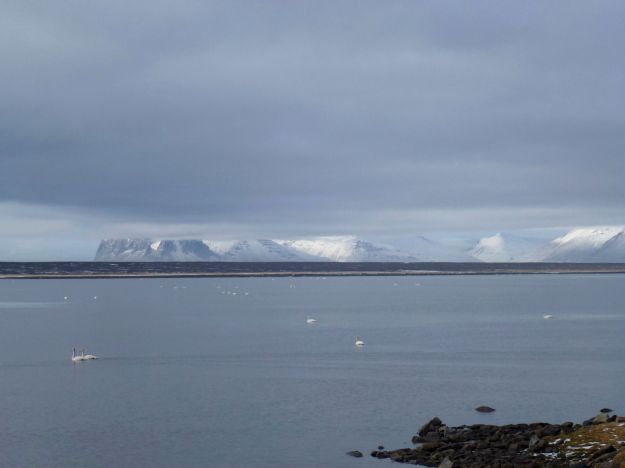 In comparison to Sea Room, a lagoon is bounded by land. And below. Na, that’s a river mouth in the south.

Nope, a Sea Room is special. You can live there, in a world within the world. So, let’s try it again… Sea Room?

Nope. River mouth. And below, what of it? Sea Room?

Nope, a river flow through a lagoon, with the open Atlantic trying to get in. Now, that’s fun. Ok, what about the view below at Dritvik?

Nope, that’s just the sea. You enter it when you leave the sea room. And below? 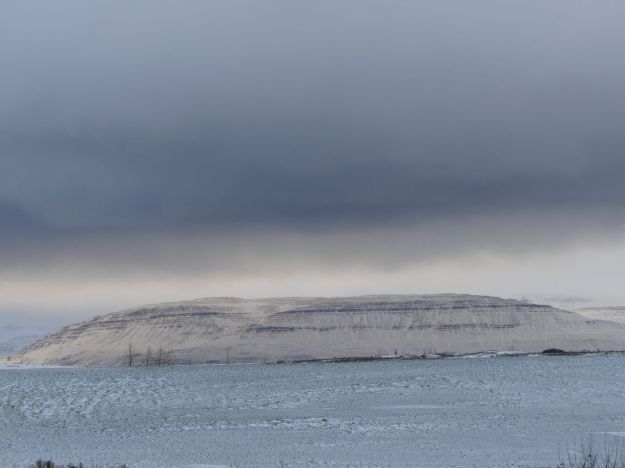 Nope, sad to say. That’s a field in Breiðafjörður. This is Iceland. it’s tricky. And below, in Skagafjörður? 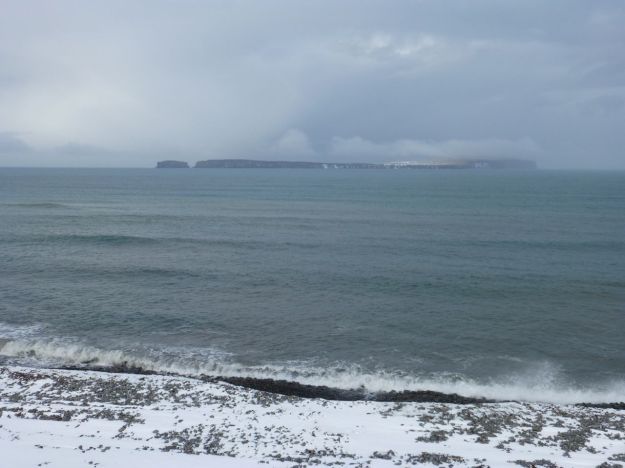 Yes! You got it! And below, at Buðir?

Atlantic again? Yup. And here’s Dritvik? Is that a Sea Room?

No, it’s an ogre and her ogre whale pet in a bay at dusk, in the rain, looking out to sea. But here’s the thing, in Iceland men rowed way out there in little wooden boats and hauled in cod, far from land in storm. They made a room of the sea, a portable one, centred on their boat, just as their island is centred in the sea. That flexibility remains in the country.

It is known now as memory. 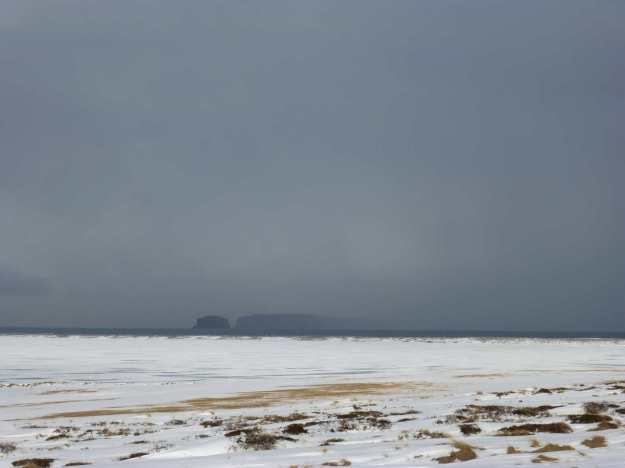 While we’ve been chatting, the ogress of Dritvik has been keeping guard to the west.

Day in and day out, in darkness and light, with a cormorant on her head, or not, she has been guarding against the formlessness that comes in off the sea.  With her troll whale companion. Never heard of a troll whale? Go to Dritvik. 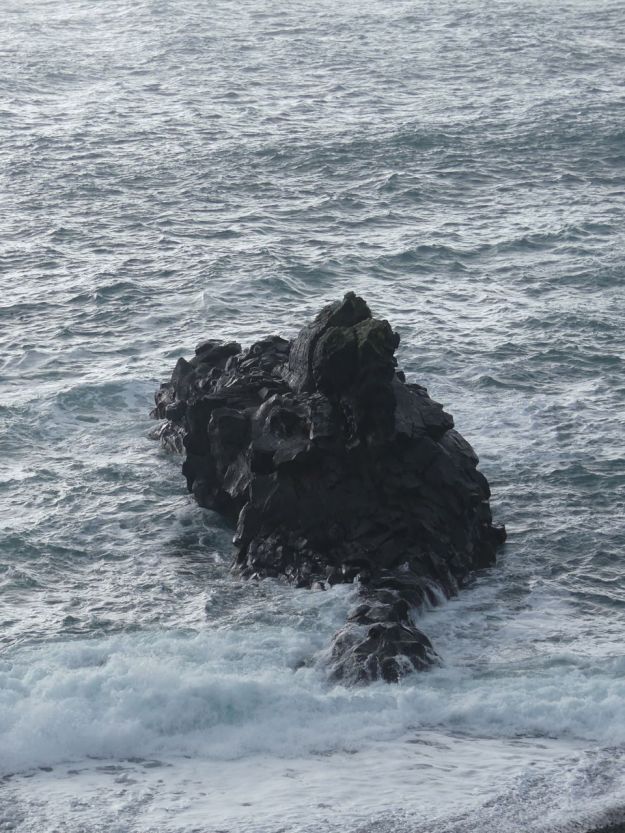 Together, they watch out, for us.

This is vitally important work. I give thanks.

I’ve been thinking about walls. What are they for? For shelter, yes, and seemingly to keep sheep in, or out, but into or out of what? I mean, look at the pastures under the Snaefells Glacier. 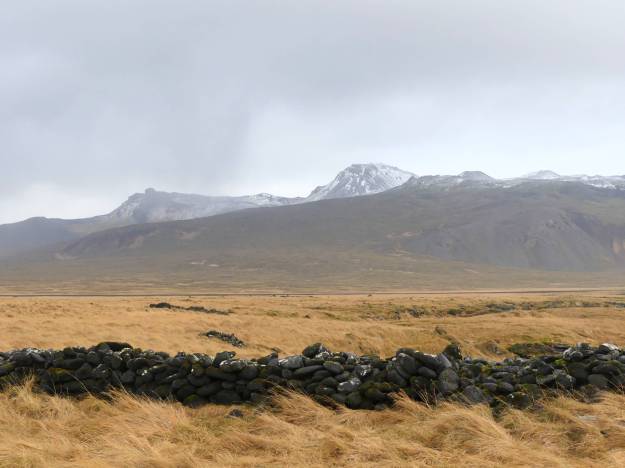 There’s precious little for sheep in the neighbouring pastures below, and any shepherd is likely to break a leg stomping after sheep in this stuff, and why? There’s as little grass on one side as on the other.

Assuming that in the past Icelandic farmers were as sensible and economical with their energy as any others, might there be a reasonable, but lost explanation? Could the walls be to direct sheep, not to make pasture but so that they herded themselves, a kind of large sheep fold, like the one at the edge of the lava (below)?

Driftwood helps. Is drifting the principle here? To reap the benefits of summer labour in the winter, when labour is just too exposed on the open earth?

Or is it to direct the snow, to bare some slopes for sheep and to bury others with snowdrifts, to provide fresh water in the spring and early summer? It could be. I don’t know. 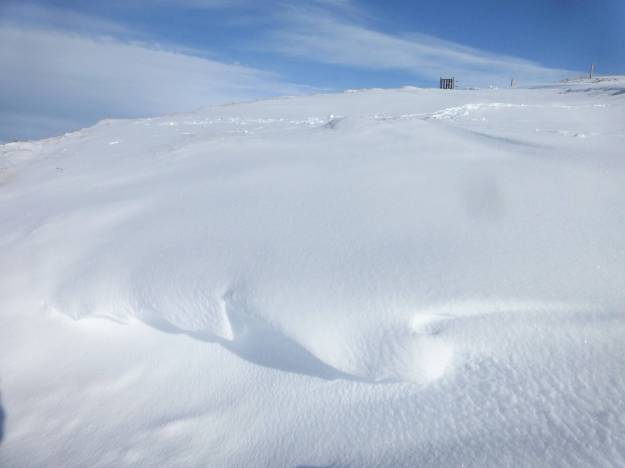 It wasn’t a fence to guide human walkers in the fog and the dark. Cairns were used for that.

… to keep sheep from drifting away from survival food, winter’s seaweed…

…into perilous holes in the lava?

Is it, in other words, about thinking with the land? Is this the wealth that Gunnar Gunnarsson said was at the heart of poverty? Is this an extension of the principle “when you run out of hay anything is hay, anything at all” to land itself, on the lines of “when you run out of pasture anything is pasture,” even if it is only an extension of the poverty of one man over another? Could this be love of land? 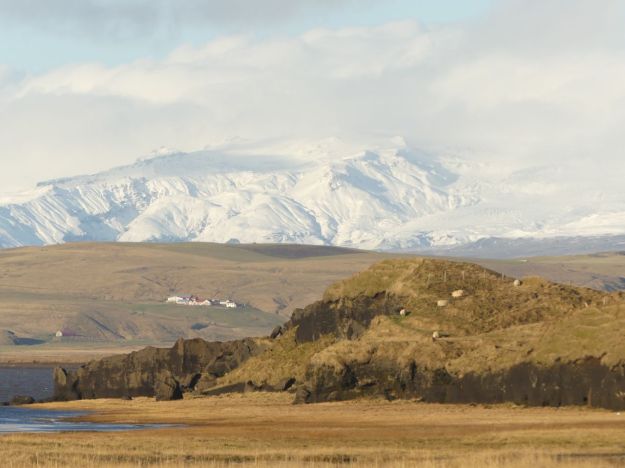 In a country in which only a landowner could wed and have children, the impetus to own any kind of land, in any kind of poverty whatsoever, must have been intense. Is that what we’re looking at here? Love?

The stubbornness not to disappear of a people from whom the benefits of community were continually removed, often by foreign traders?

Is drift a way of holding on by bending the way a path goes? I don’t know. Is it still going on?

Is this the principle of drift? Are some fences made of the mind and duty?

Is this how 1,500,000 tourists are safely guided through the cold every year by a few hundred front line Icelanders? 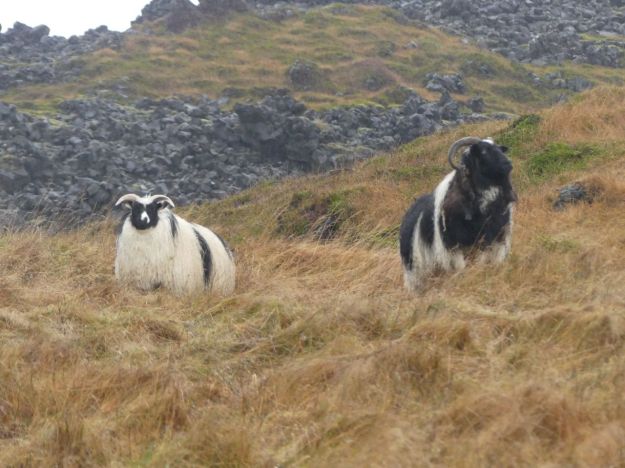 I bet the sheep know.

A Farm in Iceland
Blog at WordPress.com.